Take Back the Streets


Last week, my sister and I were sipping a glass of wine with my some family when her 14-year-old son and my 14-year-old son walked up to us on the street and asked if they could take their 7-year-old cousin out to find some food, maybe find a place to play. We looked at one another, looked at the boys and both nodded our agreement to their plan. Now, were my mother-in-law with us to hear this plan, she surely would have fallen over dead upon its completion. You see, we were in a foreign country when this lackadaisical parenting took place- and my dear MIL had sent us off, pleading, “Don’t let the kids out of your sight!”.

My sister and I aren’t horrible parents. We have managed to keep multiple children alive between us. Sure, we may not win any awards, but who has the time to constantly polish a Parent of the Year statue anyway? While our decision to allow our kids to roam free might sound questionable at 8pm in a foreign place, a little context might help. 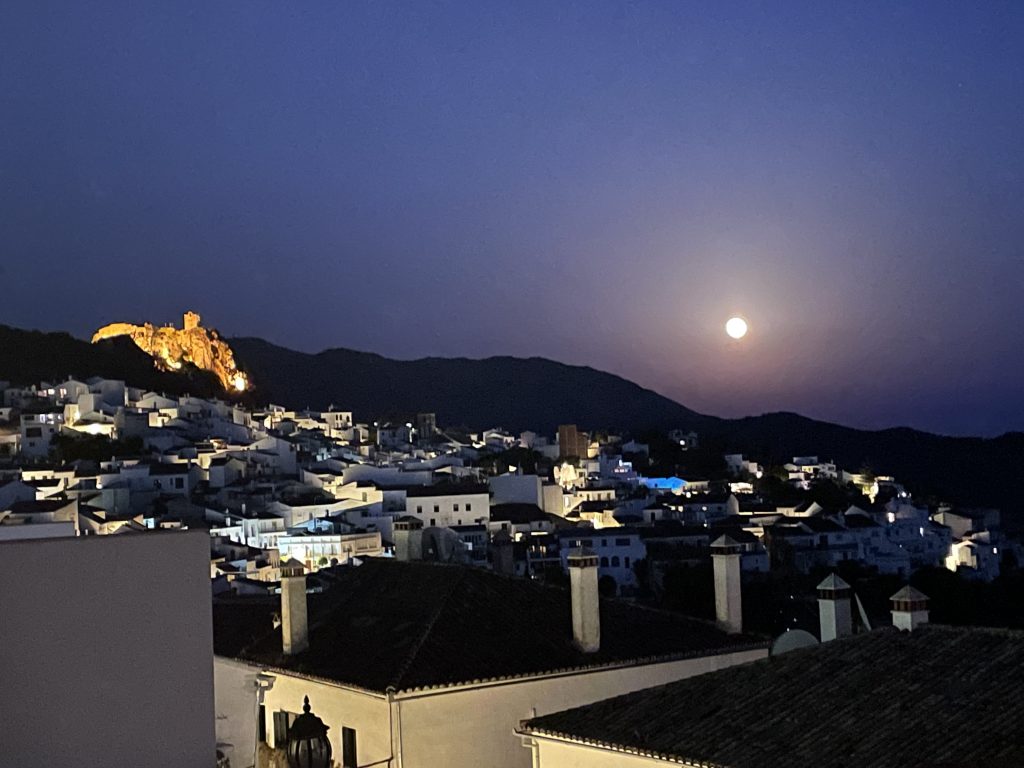 For the past 20 years, every other summer, we take a big family trip. My parents, siblings, spouses and all of our children descend on some unlucky locale to bring about a week of mayhem. In the past, we have visited Colorado, Michigan, Hilton Head, and Lake George to name a few. Covid put the kibosh on our tradition twice, so this year, we decided to go big. Some of our kids are nearing graduation age and our parents are not getting around as well as they used to. We thought this might be an opportune time to push for something a little more.

We rented a house in southern Spain, in the Village of Gaucín, in the Serranía De Ronda mountains of Andalusia for a week. In advance of the trip, we reviewed the house photos constantly and ingested as much information as we could about the town and region, but we weren’t prepared for how truly spectacular Gaucín turned out to be.

This little village of 2,000 people was absolutely idyllic. It’s know as the “balcony of the Serranía de Ronda” as it is perched on the southern terminus of the range overlooking the Costa Del Sol, the Rock of Gibraltar, the Mediterranean Sea and in the distance, the Rift Mountains of Africa. The views alone were enough to make anyone fall in love, but they weren’t even the best part. 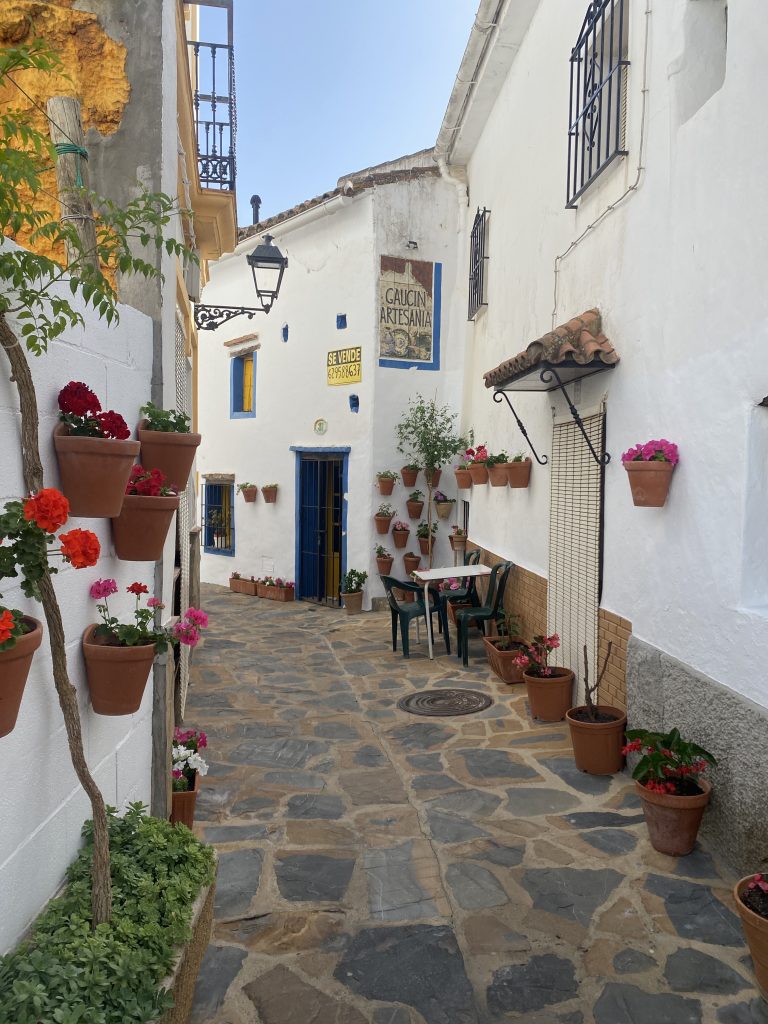 The streets of Gaucín are small, they are narrow and often steep, and they are made mostly of stone. They are gorgeous and they made all the difference to our trip. The narrow streets kept cars from ever reaching unsafe speeds so we felt safe walking down them. For the most part, there were no sidewalks, so pedestrians and cars shared the roads. When a car approached, walkers would move to the side, otherwise, you were generally in good shape to walk right down the middle. Some streets were even too narrow for a car to traverse altogether.

From our house in the village, we could walk to anything we needed- ANYTHING- the market, the bank, the boutique, the bakery, the restaurant, the pub, the butcher, the park. And we did. There was no sprawl, there was not enough room for the parking that sprawl would require, and no emptiness of the ‘in between’. The small streets ensured local businesses were the center of commerce. Whatever we needed, it was somewhere in town- and it only took 10 minutes to walk from one end of town to another. A trip to the store to get some detergent or snack was no chore at all, but instead-a pleasure.

A stroll to the store meant more time in the gorgeous streets, watching the old men make their rounds about town, seeing kids playing soccer, saying “Hola!” to everyone we passed. Quickly feeling like a part of this little community was an experience- it was fun, it was social, it was fulfilling. It made us feel a part of something and it was the antithesis of loading up the SUV, turning on a DVD for the kiddos, hauling three months worth of groceries back from Costco and sitting in traffic for an hour, all while never speaking to an actual human. 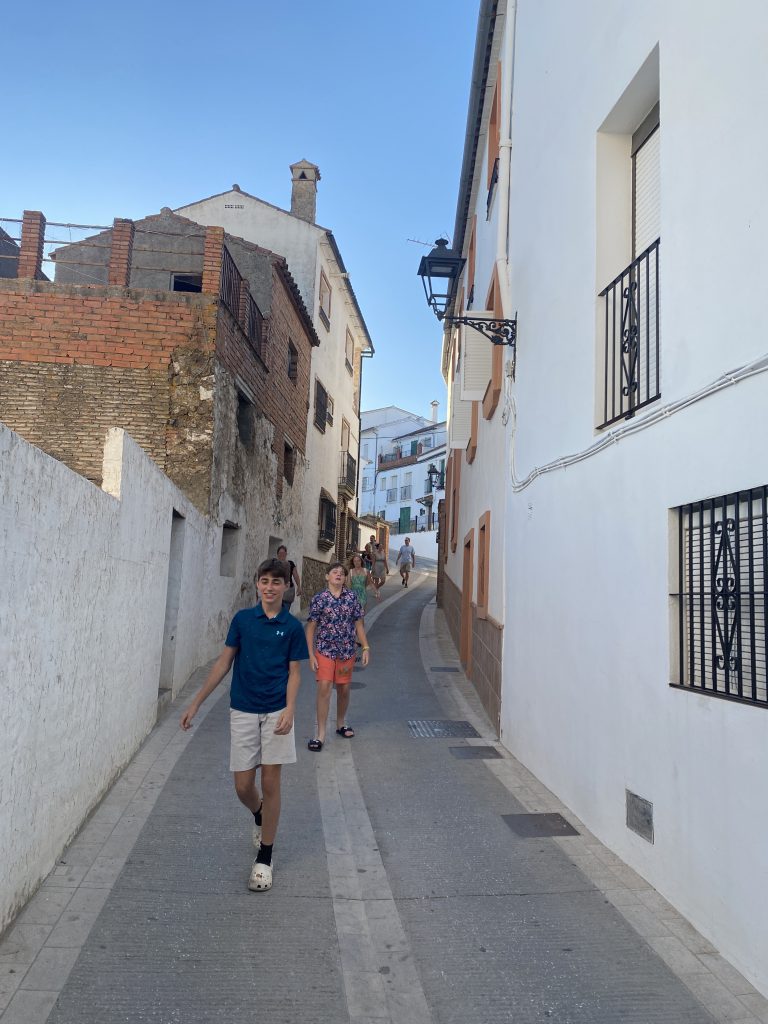 It’s hard sometimes, to pinpoint exactly what you love about a place- but in Gaucin, it was the streets. It’s not that they brought the community together, a community IS already together, it’s that these streets didn’t divide the community like ours do at home. It was safe to walk anywhere, but it was also incredibly satisfying. Those seven days were the most my 73-year-old mother had walked in years- because it was simply the best way to get around. Seeing her walk to dinner every night and out for coffee every morning was eye opening as to how awful our streets are for the aging population and how they only encourage physical decline.

These small quiet streets also made life so much more social. We engaged with people as we walked down the street. We shared in others’ lives and what they were doing. We saw people face to face and experienced the humanity that comes along with being up close and personal. We saw the same people every day- and that tends to build a bond. Beyond just being used for walking, these streets became a PLACE. A place to walk, yes of course, but also a place to chat, a place to play, a place to sit (yes, there was built in public seating!), a place to garden (holy shit- we saw STREET SIDE GARDENS), a place to hydrate (built in, for over 100 years, public drinking fountains!), and a place to dine.

Let me rant about this one. Streets make for the best outdoor seating. 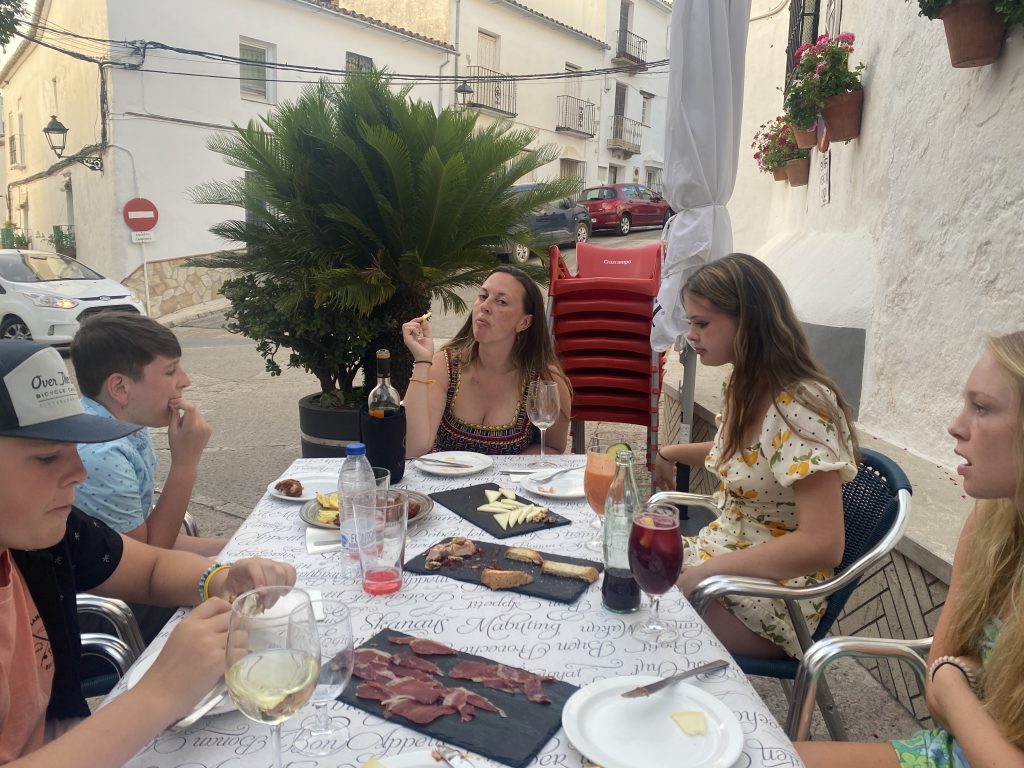 One of the most enjoyable parts of our stay were the restaurants. This village of 2000 had at least 12 different dining options, all of these with outdoor seating, and when I say Luxor seating- it’s the street. No wooden deck, no gravel parking lot, no astroturf oasis- the restaurants literally put tables in the street- and it’s glorious. I highly doubt the seating was ever codified into ordinance (NIBY’s beware!), the restauranteurs simply placed tables along the road where they wouldn’t impede traffic. Cars came by, but not that often and at speeds that aren’t jarring or loud.

It was truly such a pleasure to sit with family, sip a beer and watch the town go about its business. Who wants to eat at home when the social life is taking place on the street? Seeing the old men in town make their evening laps, watching the teenagers awkwardly figure out how to flirt, sympathizing with young parents as they tried to manage the demands of babies. All stages of life taking place on the street in full display just as it has always been. This is the most entertaining show in the world, because it is the one we can all relate to. It’s life and it is a pleasure to witness it, and when people are safe to use streets as intended, we are afforded an opportunity to do just that.

So we sat on the sides of streets and snacked and we sat in the little plazas and we drank. We sat outside for hours every day because it was the best part of our stay. No mountain view, or Mediterranean vista could compete with the pleasure of being with people. We got to know the restauranteurs and we got to know some regulars. We were outsiders of course, but felt the pull to want to be something more. It didn’t take long for a table of 2 to grow to 10 as additional family members strolled by and decided to join for a glass of sangria, because why wouldn’t you? 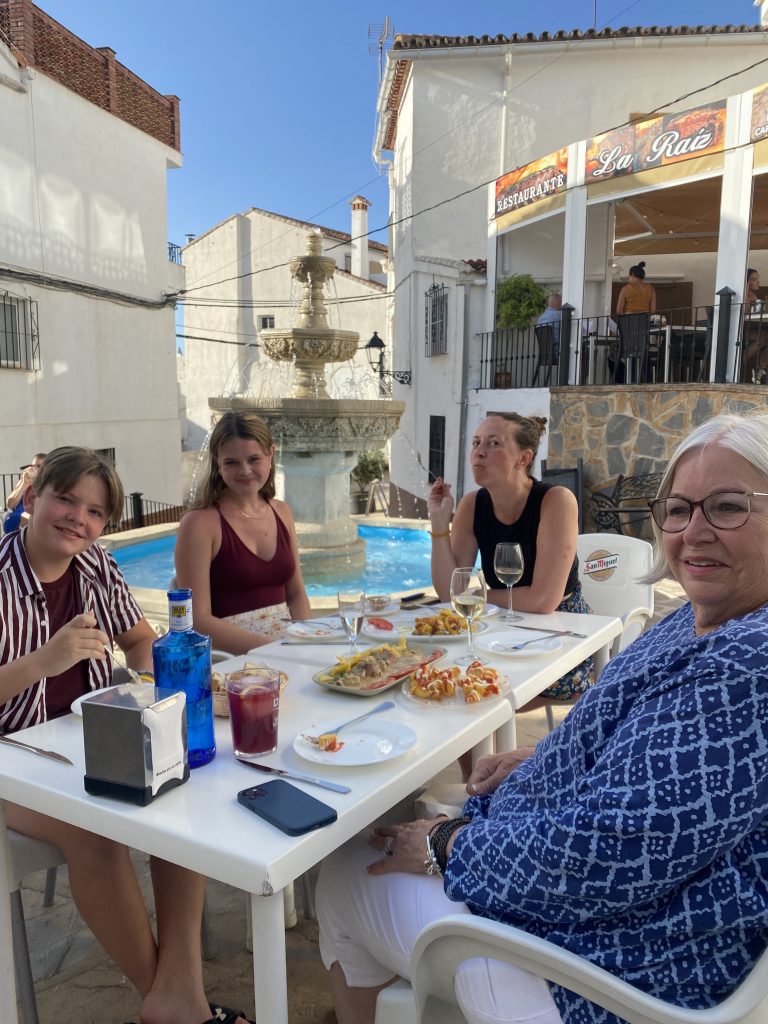 I understand my privilege and I am grateful for it. We are exceedingly fortunate to get to visit such places. I also never forget when I am traveling that I am an outsider, I am a visitor and I am not pretending otherwise. I don’t just travel to see what life is like in other places, but to experience what life could be like here at home. If we would have made some different decisions about our streets, it’s hard not to wonder how things might have turned out. To experience first hand what we all know to be true, that if we took back our streets from cars, we could all have something so much more.

Streets are part of the public realm, they belong to the people, but we have ceded them to the machines. They are what we pay for as taxpayers and we must take them back. We must wrest them from the grips of cars, from transportation engineers and asphalt obsessed politicians. We deserve streets for people. Places where one doesn’t have to risk their neck just for daring to visit a neighbor. 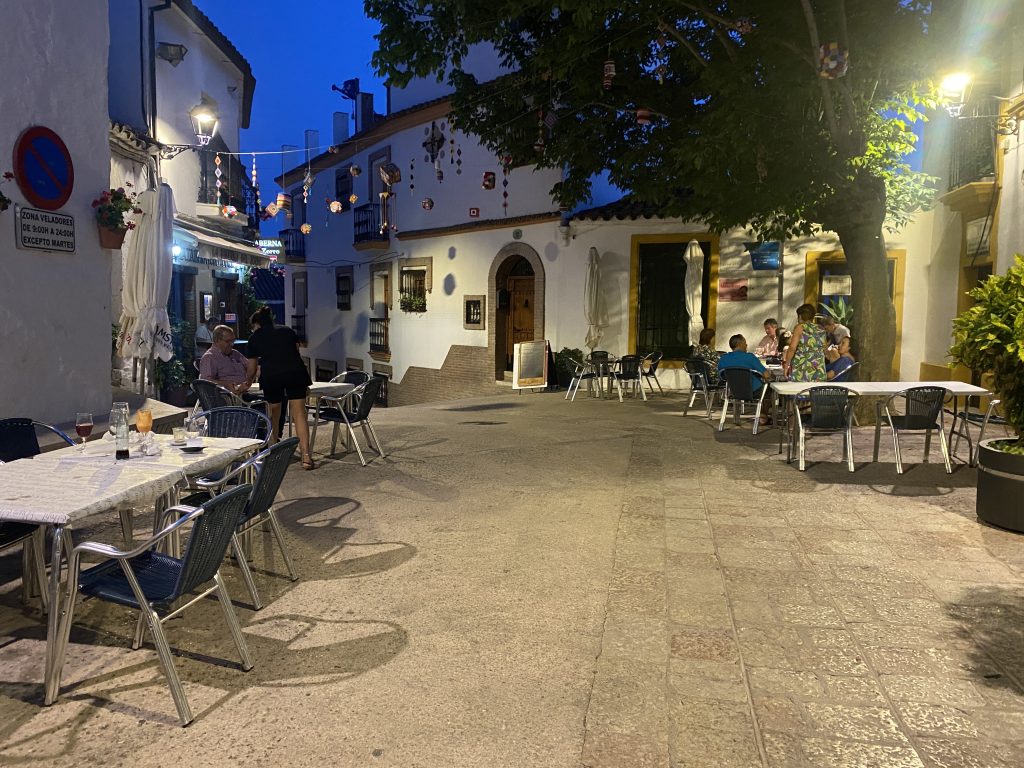 If people took back the streets, our kids could leave the basement and play outside again, where they want to be. Adults could make more friends and have a robust social life. Small business could thrive against the parking lot empires. We could sit outside in the quiet and enjoy a meal with friends and neighbors at a local restaurant. We could let our kids be free again and have some autonomy. We could have better lives if we just had better streets.

So while it might have made my mother-in-law want to up and croak at the idea of having our kids roam free at night in the streets in some strange place, it was because it WAS some strange place and not home that made us comfortable with the decision, because I would never allow the same here. See, I am not afraid of our kids getting abducted, this sort of thing never crosses my mind, I am afraid of them getting run over. People aren’t the threat, cars are. So when we were in Gaucín, the kids were safe. All the indicators were there signaling that it was okay for kids to play outside. The cars were slow, elderly folk with canes made their way about town, kids played everywhere without supervision. We knew that without cars, there was no threat to their safety.

So when Finn and George asked if they could take James out to eat and then find a place to play soccer, we knew with full confidence that they were safe and that this is the type of freedom we want our kids to experience. The type of autonomy they can rarely enjoy on our streets at home. So off they went, and they managed to have dinner by themselves and find some new friends to play soccer with in the street until we gathered them up on our way home, well past midnight. 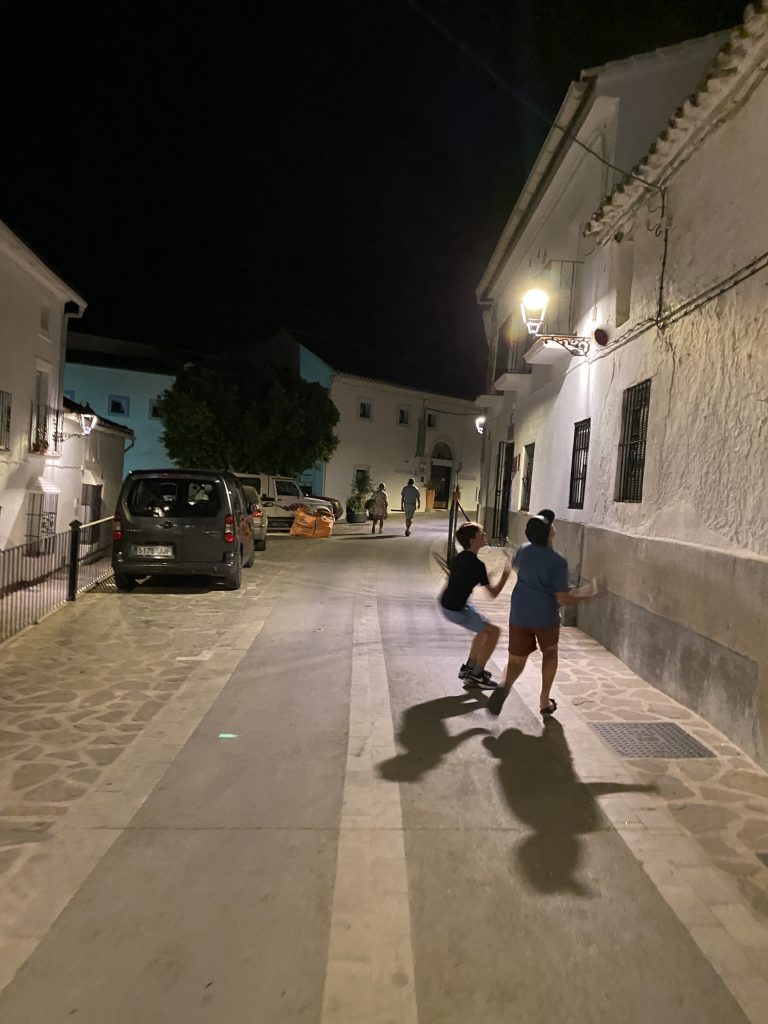 Whimsy. Delight. Maybe it’s called charm. There is a facet to great places that I find it hard to put my  finger on, but it’s one of those things that
READ MORE

Last week, while in Sterling Illinois, the City Manager asked for my first impressions of their town. I spoke candidly and bluntly (shocking, right?). Told him that Sterling had done
READ MORE

I grew up attending swim meets in Defiance. I took my drivers license test in Defiance. I even got my ass kicked on an annual basis by the Defiance High
READ MORE