Locals Are People Too


Recently, I was sitting down for coffee with a couple of colleagues/friends at a neighborhood cafe. We were discussing the concept of complete streets as we sat outside and watched traffic go by. Talk turned to local reluctance to pass such policy and what barriers might stand in the way. We wanted to understand what sort of push back to anticipate if we tried to implement traffic calming measures in our neighborhood. After talking through it, we started to grasp something important. Opposition will come from within the community, not in defense of locals though, but in defense of people that live somewhere else.

The block where the three of us were having our coffee is the heart of our neighborhood. It’s just one commercial block, but it serves such an incredibly important function for thousands of homes. It provides all the families in the area a place to walk for coffee, lunch, dinner, drinks, ice cream, banking, hardware and some various other retail. It greatly diminishes the need for more car trips, but more importantly, it provides everyone in the neighborhood a place to convene. This is where we see one another. This is where we gather together and where kids meet up. This one commercial block helps make a collection of homes in to a community. It is vital for our well-being and the health of our neighborhood. 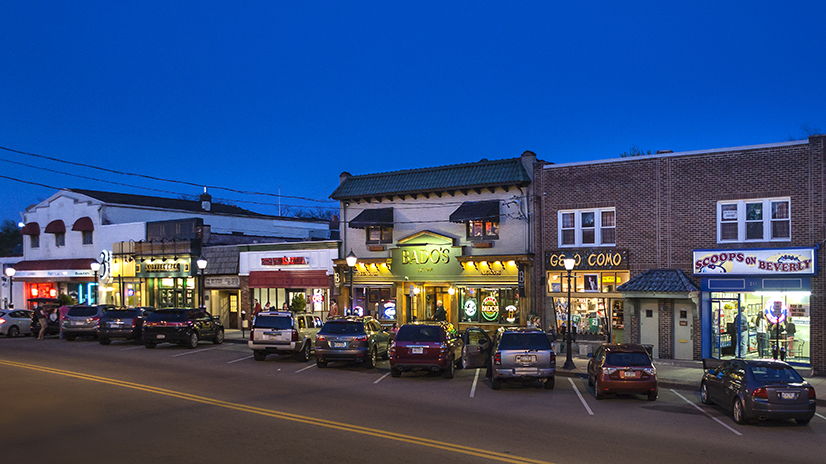 This one block of Beverly Road completely transforms the nature of the neighborhood. If someone decided to rip it all down one day and replace it with more homes, housing prices in the neighborhood would plummet and the sense of community would wane. It would transform the neighborhood. I think of the loss it would be not to see a line of kids out the door of the ice cream shop every single summer evening.

So much of the public space on this block is dedicated to the automobile, at least triple of what is dedicated to people. Angled parking on both sides and two wide lanes makeup the majority of the public right-of-way. Plus, public parking in back. This street that should serve the neighborhood, fails it. The sidewalks are narrow and provide nearly no space for outdoor seating. The crosswalks are too wide and cars travel too fast. This block was clearly intended to serve as the heart of the neighborhood, especially considering the local elementary school is located here. It is still a draw, because of the businesses and the school, but instead of prioritizing the safety and well-being of the people that live here, drivers from other neighborhoods are given preferential treatment. 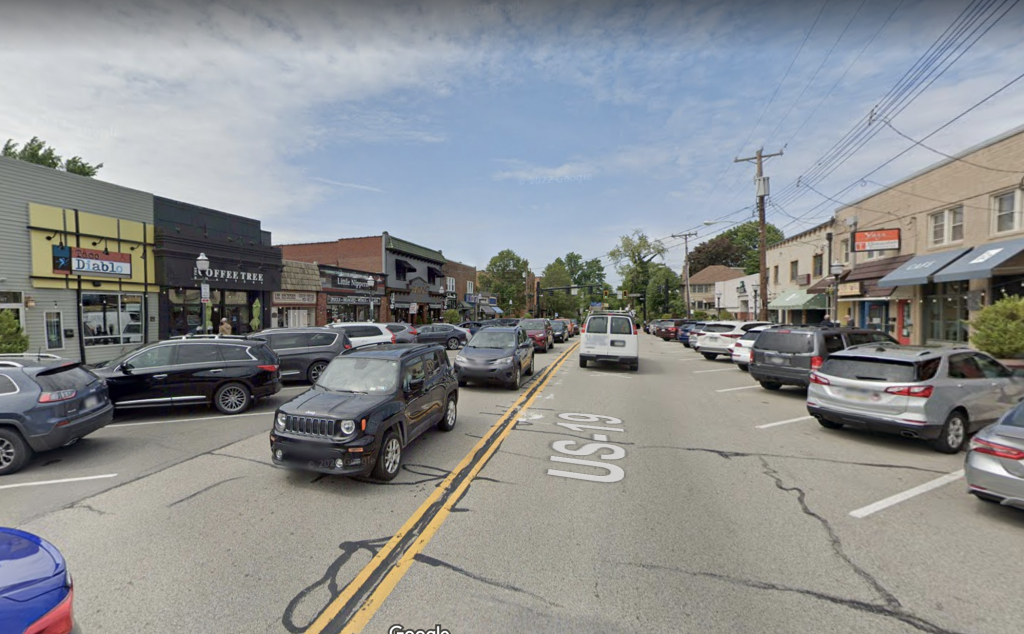 Look, it’s fine if other people want to live in car-centric neighborhoods. That is their choice and right and more power to them, but I don’t- and my neighborhood should not be designed with their “convenience” in mind. I don’t really give a single shit if a driver has to slow down, hunt for parking or find another route. That is their decision as to where they want to live and how they want to live. The people in my neighborhood and people that choose to live in near a downtown decided they didn’t want to have to drive to everything, yet we have to cater to drivers from some other neighborhood with our streets and with our lives?

The commercial block of Beverly doesn’t need so much space dedicated to parking. People nearby can, and in fact, do walk. Last year, a cafe at one end of of the block removed two parking spaces and replaced them with ten umbrella shaded tables, and they have been full since day one.

So…let’s generously assume that each car that used those two spaced held two people and those two people each stay for an hour, at the end of a nine hour work day, those parking spaces would have brought in an additional 36 customers. So removing those parking spaces conceivably pushed away 36 potential sales a day. Let’s say those ten new tables seat 2 people on average for every hour of business. They would seat 180 people a day and, from the looks of it, they typically do. Subtracting the loss of the people using the parking spaces, this cafe, in prioritizing people over cars, increased the amount of people they serve by more than 140 each day. 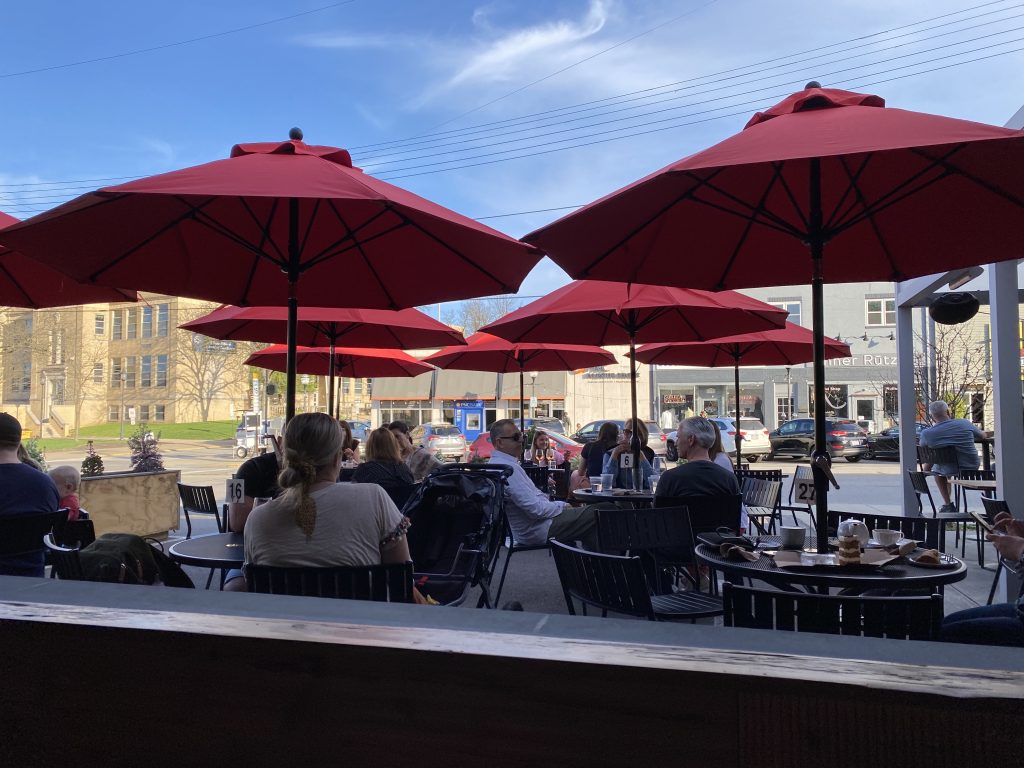 There are thousands of examples across our country of the simple truth- that people will find a way to get to desirable spaces. Great restaurants never suffer from a lack of parking and neither do the great commercial districts. The more car-centric a place is, the fewer people will want to visit. Such places are loud, unattractive, and scary. By ceding over so much space to the car, my neighborhood commercial district is unable to live up to its potential. And why? So someone two towns over can get to work 40 seconds faster?

This is what we do. We turn walkable streets into highways so as not to inconvenience someone driving through. So they can get to their car-centric neighborhood faster. But what about the locals? What about the people that chose to live somewhere that they could walk to the store? What about people that chose this place so they could give their kids some autonomy and provide them a place to play outside without having to worry about some pissed off driver running late.

What we can learn from the cafe mentioned above, when car space is given back over to people, it fills up with people. When people space is given over to cars, it fills up with cars. I don’t want to live amongst more cars, I want to be around more people. Our neighborhood streets don’t need to accommodate drivers. They should be designed around pedestrians. They are the people that call this place home and those designs should reflect why they moved here.

This one block does not have to accommodate cars. Cars dominate nearly every other inch of our society, can’t we just carve out a little space for humans? Can’t we just have some scraps from the truck table? Mabe just one block where people don’t feel threatened and where it’s peaceful and we don’t have to wonder what terrible thing will happen to my child if they dare to walk across the street?

This one block doesn’t need parking, it needs sidewalks that are double or triple the width. The roads need to be narrower so cars slow down or find another route. The space between the buildings would fill up with tables and chairs and PEOPLE! Instead of moving cars through quickly, we could have quality public space to meet up with one another. We could give local businesses a huge boost in sales and raise property values all around. In inconveniencing motorists, we could convenience residents. The elementary school would be safer and kids could have some autonomy to go play outside. 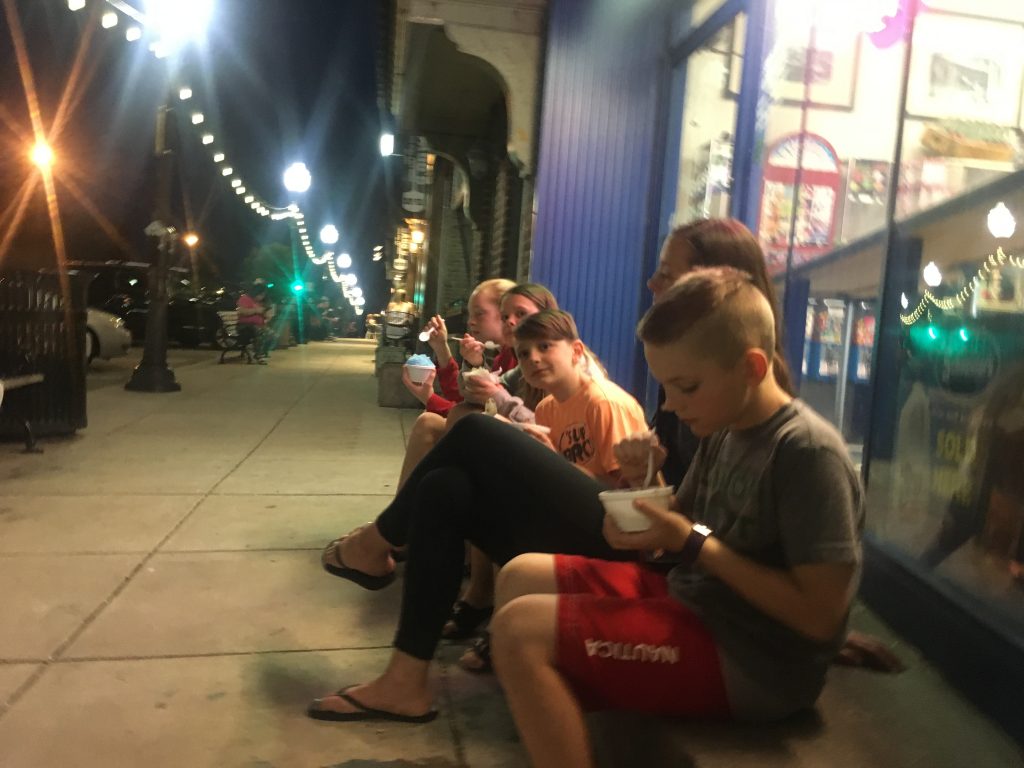 Locals are people too and just because we sometimes walk places, doesn’t mean we are second class citizens. We just don’t find cars to be all that convenient. We want to experience the pleasure of taking things a little slower. We enjoy using our own bodies to move about space and want to experience the pleasure of running into people we know or don’t know on the street. I want to be out of the car, having face to face interactions. I want to sip my coffee with other people in a pretty public setting, and not in the car on my commute through someone else’s neighborhood.

Streets are part of the public realm. They are paid for with tax dollars and should reflect the values of the people that pay them. Giving over streets to cars is the equivalent of giving over all of our parks to parking lots. Streets were designed for people and were used by people in this country up until the 1930’s when we gave them over to cars. In the rest of the world, streets are still for people, cars are not given priority. It makes me think of the quote from former Bogotá, Columbia mayor, Enrique Peñelosa “An advanced city is not one where the poor can get around by car, but one where even the rich use public transportation.”

We are not making our neighborhoods and towns any better by giving preference to cars. We are in fact, making them worse. They are less safe, less desirable, less attractive, and less fun. They are also worse for local businesses and worse for property values. If you are in a type of position of authority in your city, consider who you are serving by giving cars preferential treatment. Are these car-centric streets making your city any better? Are they attracting amazing new people or keeping the best and brightest from moving away? Are those streets raising the tax base and fostering attachment? Or are they simple helping someone from somewhere else get home to their subdivision a little faster at the expense of everyone of your constituents? 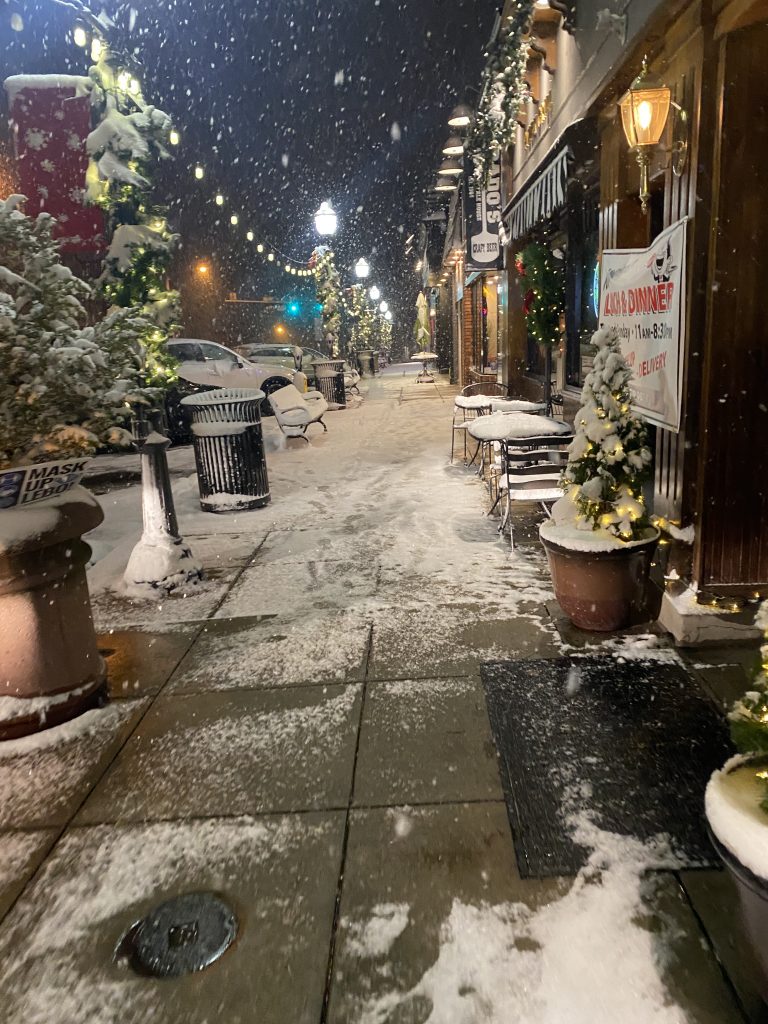 The question “how do I get people in my town to care” was posed to our panel of three last week in North Little Rock. I was on stage at
READ MORE

I received a bit of a surprise via email late last week. An RFP for a downtown master plan was addressed specifically to me. This was a surprise because I
READ MORE